We did something special this year for the 2016 goldRush Rally 8; A group of exotic super hero car wraps for the Taylor Lynn Foundation. TLF is a non profit organization that raises money for kids in need, in the form of micro grants.

The super heroes rallied from Boston to Los Angeles, handing out souvenirs to kids along the way. There were 5 total cars, and the drivers were dressed up in costume to fill the part. The windshield banners on each car had a meter to reflect the percentage of the fund raising goal that has been met as they progressed through the rally. By the end of the rally, the cars had raised tens of thousands of dollars, which was all given back to kids in need, through the Taylor Lynn Foundation.

McLaren 650S: The HULK
The Hulk wrap was designed as if the character was bursting through a wall, with his face at the front and the remains of the broken wall crumbling toward the back. 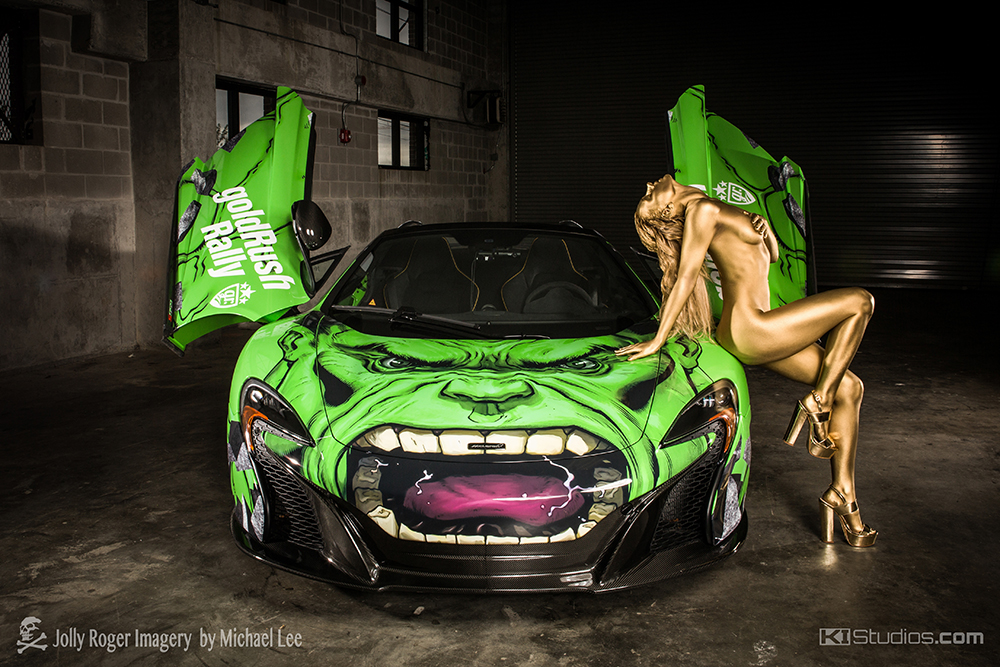 Ferrari California T: Captain America
The Captain America wrap was designed to mimic his suit, with the shield hanging on the door. The blue of the car is a digitally printed texture to look like roughed up leather, complete with the stitched A on the roof and red / white accents. 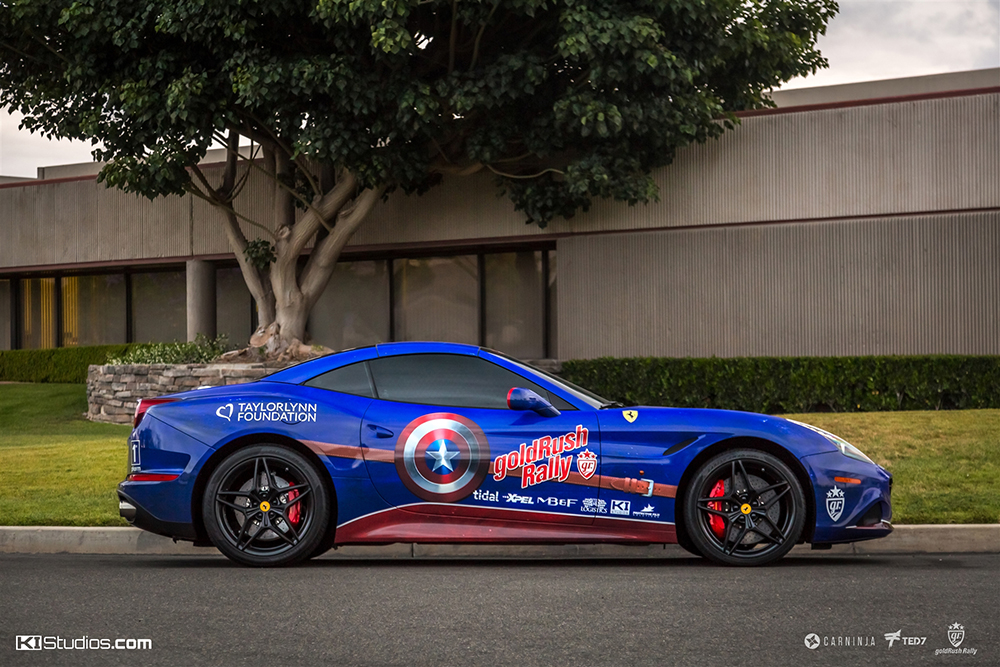 Vorsteiner McLaren MP4-12C: Superman
Our own Ryan Tounsley in the Protective Film Solutions McLaren went as superman. A base layer of step and repeat lettering was applied first, to provide a subtle embossed texture of the Superman suit, replacing the kryptonian logo with sponsors. The cape was printed on chrome vinyl and laminated in satin to give it a silky shine. 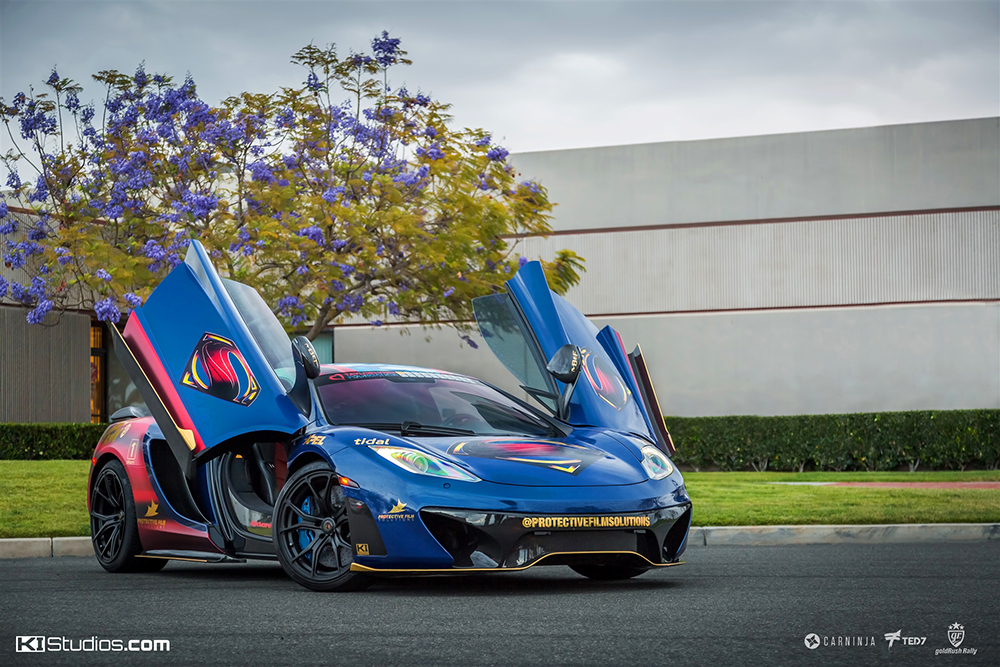 McLaren 570S: Spiderman
The Spiderman wrap was designed to look like Spiderman’s suit. The digitally printed texture was well worth the challenge of trying to line it up across all of the body panels around the car. This wrap was installed at our Protective Film Solutions partner shop in Orange county, so we knew they could handle the task.

Porsche 991 GT3: Deadpool
The Deadpool wrap was designed in 100% vector format using Adobe Illustrator. Even the black of the car is is textured to look scratched, worn, and full of bullet holes. Details you likely would only see in person. The car started off as Lava orange, and two days later was covered in blood splatters. Sure, Deadpool is far from PG13 but lets face it. Kids still love him. 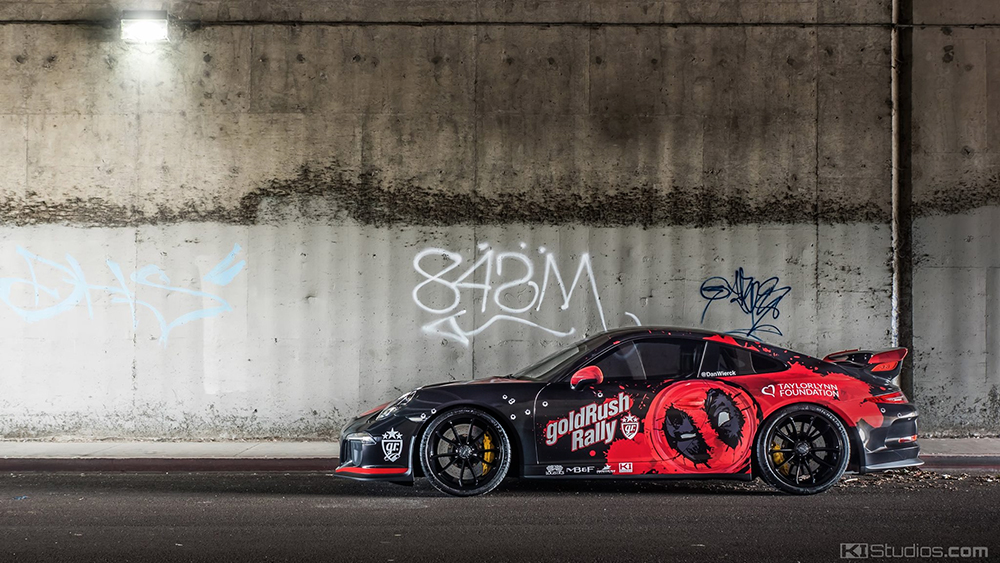 Here is a quick look at the design, print, and install process of the Deadpool Porsche GT3:

A special thanks to Ted7 Photography, Grubbs Photography, and Jolly Roger Imagery for the photos. Our partners Protective Film Solutions for the help with the projects, and of course, the Taylor Lynn Foundation for everything you do.

KI Studios is a privately owned design studio based in San Diego, California. We design high-end and exotic sports car livery stripes and printed wraps. We ship our products worldwide. KI Studios was started in sunny San Diego, California in the early 2000's as a side project and hobby. Now … END_OF_DOCUMENT_TOKEN_TO_BE_REPLACED

New team livery designs in the works. Choose your

@readymotorsports GT4 Clubsport MR out in the wild

Check out the latest @w2wracing car with our Cover